Brett Steenbarger, a private trader, PhD, was the first to study financial markets from the standpoint of behaviorism (behavioral psychology) and has written many books on the subject. Sternberger trains managers and traders in financial organizations. In his note, he notes that in an effort to improve our own trading, we work on our minds and psychology. At the same time, we are much less likely to realize that the best way to maintain positive trading psychology is to trade well. 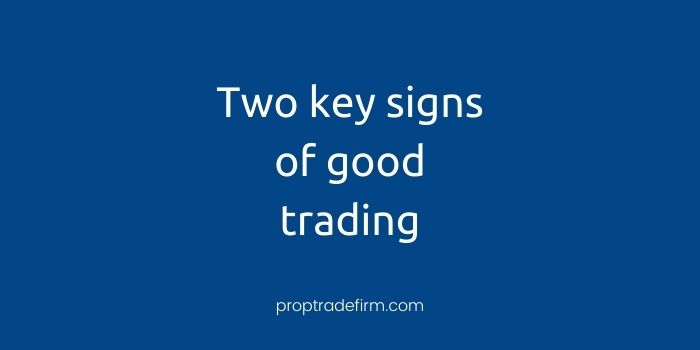 In answering the seemingly difficult question, “what does it mean to trade well,” Steenbarger cites just two key attributes of quality trading.

Quality trading is planned, not reactive (spontaneous). Planned trading means that we start with an idea that we have already researched, and then determine good risk/profit points to implement that idea in the market, as well as the right sizing of trades so that we can easily survive a mistake. Planning means that we clearly identify what market event should cause us to exit the trade and/or change our positions. When we “over-trade” or open positions for fear of missing a move, these trades are reactive. In reactive trading, we make decisions for psychological reasons, not logical ones.

Quality trading is based on a broad view and is unbiased. Sometimes we see traders who trade being fixated on a single idea and/or prejudice. They look for evidence to support their views and disregard facts that might make them question their positions (confirmation bias). Unbiased trading means that we can express ideas in different ways and trade using several independent ideas. We are not tied to one side of the market or one trading idea.

In conclusion, Brett Steenbarger points out that a very simple way to evaluate our trading is to evaluate each trade against the two criteria above and to summarize those evaluations. If we develop as traders, we will become more planned and unbiased in what we do. We will develop processes that allow us to plan and break new ground.

In his view, the main goal is to trade well, not just make money. If we trade well, we inevitably maintain a focused mindset and take the best possible positions for success.

Trading on the stock exchange is one of the ways to actively invest. When you don’t just buy a bundle of shares and wait for regular profits, but make money on the fluctuations of exchange rates.

Conventionally, this can be compared to the traditional trading business. Buy higher, sell lower. Or vice versa.

What do you traditionally trade:

Cryptocurrencies also belong to currency pairs, but they are usually singled out in a separate group because of their individual specificity (in addition to signs of money they have resource signs – in particular, the finiteness of the number of Bitcoins).

Trading on the exchange for beginners often starts with currency pairs – they seem more familiar, understandable, and predictable. This is a controversial statement. But psychologically it is more convenient to start with currencies.

How does it all happen?

There are so-called market makers. Large companies and political groups invest a lot of money in the market and are able to really move the price.

The price movement, relatively speaking, is a competition between those who want to “sell high” and those who want to “buy low. Plus, the influence of political events. For example, the news about war or man-made disaster in some country. The currency of that country rapidly begins to fall in value – big investors withdraw their funds, saving investments.

This is a rough example, but it gives an approximate idea of what is going on in the financial market.

The average trader has no effect on the market, but having analyzed the situation correctly, he can add his capital to those who are now moving the market and making a profit. But his investments are insignificant compared to some national banks, and to enter the market, you need a broker – a company, consolidating funds invested by traders and transmitting an “order” to buy or sell on the foreign market.

Normally the brokerage company is an intermediary between traders and the real market. In reality, it isn’t always so. That’s what generates the most persistent myths.

Swindle or a way to earn?

There are two completely polar opinions.

Adequate brokers do exist and with a certain approach, trading can bring substantial profits.

But the percentage of cheaters in this area is high. And real trading is the same profession, as well as any other. In order not to lose investments, and in the future to increase them, you will have to learn the strategies, study the behavior of currencies and other assets, act strictly according to your plan.

Do not confuse trading and gambling. People with a passion for gambling are strictly not recommended to work in trading. With 99% probability excitement and emotionality will lead to the loss of all funds.

Conventionally, there are three types of “brokers” – companies that provide trading opportunities.

Classical swindle – most often it is in addition to the classic pathos of “push the button – you will get the result” kind. To get the result, you will, by all means, have to register with a certain brokerage company, which has already had a lot of negative feedbacks, associated with wrong quotes, losing money, and inability to withdraw money.

And the problem is not that newbies, who do not know how to trade (although the percentage of successful traders really ranges from 5% to 10% and below we will explain why). In this case, it is impossible to withdraw the investment in principle. The broker does not exist in principle.

Deceived traders are drawn a picture with quotes that move chaotically. The transferred funds are deposited to the accounts of the owners of the scam. And given the fact that these “failed companies” are registered at the other side of the world, trying to recover their hard-earned money is virtually impossible.

There is no single strategy, no magic trading robot, which you could turn on and count the profits. Neither paid nor free. If you are offered such a thing – it’s a sure-fire scam (otherwise we would have been full of millionaires).

Derivative financial instruments: futures, options – what is the difference?
An exchange is a marketplace where various assets are

How do I start investing if I only have $100?
It’s always better to start with a hundred dollars
Related posts
What is free-float or free-float stock?
Free-float shares what is it? The volume of issuer’
Using a VPS-server in trader’s work
Let’s talk about virtual servers and their use
Pivot Points indicator: what it is and how to use it in trading
One of the main tasks of a trader is to determine the
Investing in securities: where to start?
Despite the fact that trading at the stock exchange